Snoring is more than just an awful noise. It is a soft palate vibrating process that signifies the airway isn’t opened correctly. Snoring restricts airflow while breathing, creating aggravated pressure on your heart and circulatory system as the body struggles to cope with the reduced blood oxygen levels. 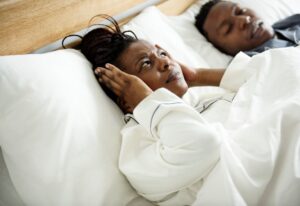 Therefore, it is a dangerous circumstance that can cause other symptoms such as hypoxemia , morning fatigue, daytime sleepiness, (low oxygen levels in the blood), and restless sleep. Snoring is also a marker for a disease called obstructive sleep apnea. OSA on its own is a risk factor for high blood pressure, stroke, and heart failure. Lack of sleep caused by sleep apnea can also lead to anxiety and depression.

Therefore, the consequences of snoring and apnea aren’t something to overlook. Improving your snoring symptoms can result in maximum impact on your productivity and feelings of wellbeing. Your partner and loved ones will also no longer have to be subject to such an awful noise every night.

What is NightLase Snoring and Apnea Treatment

Fotona’s NightLase system is a patient-friendly non-invasive laser treatment that improves the quality of your sleep without the need to wear any devices. NightLase improves airway volume, reduces snoring and sleep apnea without requiring lots of treatment. With NightLase, you can enjoy a wholesome life with plenty of quality sleep experiences.

How does NightLase Treatment Work?

NightLase works through a gentle and safe laser-induced tightening effect through collagen contraction in the oral mucosa tissue. NightLase does not also require chemicals. In truth, the entire Fotona NightLase laser snoring and sleep apnea treatment occurs in two steps.

The first step is called Pre-Conditioning. In this stage, the laser light is released to preheat the tissues around the soft palate, anterior pillar area, hard palate, uvula, tonsils, posterior pillars, and the bottom and lateral regions of the tongue.

The second step follows immediately and is known as the Tissue Strengthening stage. Here, the Doctor will release the laser light to strengthen tissue.

Both steps combined trigger protein transformation with the collagen fibers, causing them to tighten so there would be more space in the throat for breathing. The laser treatment would only use moderate energy between 104oF to 118oF (40 – 48oC). So the sensation you would get is that of a fine mist of hot water sprayed into the throat.

In the same light, the heat used is gentle enough to not damage any delicate tissues but still strong enough to induce that protein contraction.

You would be amazed at how painless the Fotona NightLase procedure would be. A study published in the Journal of the Laser and Health Academy shows that patients only report discomfort as an average of 1.5 on a 1- 5 scale.

What Happens After NightLase Treatment Session?

Usually, treatment will take place between 30 minutes to one hour. After the session, you will be observed for a few more minutes, and that’s it. You won’t also need any anesthetics and can begin eating and drinking within a few hours or days.

Again, you will have to repeat treatments for three sessions to complete the entire course of your first NightLase treatment.

The treatment should also span a seven-week period which is about 2 to 3 weeks in-between treatments. Afterward, you will need a maintenance session every year or two.

Is the NightLase Laser Snoring and Sleep Apnea Treatment Effective?

Our Laser snoring and sleep apnea treatment in Atlanta is highly effective, with the NightLase having a high success rate. The same study mentioned above further reviewed results from patients over one year of clinical experience. It discovered that the average snoring severity score drops by more than half after only two sessions. Over 95% of patients using the NightLase have witnessed improvements in snoring symptoms, with approximately 60% stating that their results were excellent.

Another study published in the same journal found that about 80% of patients began breathing easier after treatment with increased levels of focus and alertness. Other studies further show that improvement in symptoms provided positive benefits spanning up to 36 months later. However, do bear in mind that treating the cause of the condition alongside management is recommended.

This dual-wavelength laser system from Fotana offers the highest performance Nd: YAG and Er: YAG dental lasers for expanded dual-wavelength treatment options. This laser system can also be used for TwinLight Periodontol and Endodontic treatments. LightWalker’s AT model especially offers incredible ergonomic comfort and convenience because it is the only dental system on the market requiring a built-in scanner-ready technology.

The Dynamis laser system also offers a solid but gentle Er: YAG that optimizes the length of every pulse. This mode allows superficial penetration of heat into the tissues without any effects or damage. Therefore, the Dynamis laser system can be used for sensitive tissue treatments within the mouth and provide intense clinical effectual heating.

The SP Line is a complex laser system used for multiple applications. This multi-application laser system comes with a full-featured system. It offers the highest possible performance in Er: YAG and Nd: YAG lasers. Therefore, it is excellent for a wide range of applications in dermatology and aesthetics. The SP Dynamis model also adds an additional surgical QCW Nd: YAG used for many other surgical procedures such as hyperhidrosis and lipolysis.

Snoring and sleep apnea are severe conditions that require treatments as soon as possible. Fortunately, the Fotona NightLase Laser snoring and sleep apnea procedure helps you deal with the problem in the most comfortable way possible. It is a gentle, safe, and easy way to get back your goodnight’s rest and your confidence. Plus, you will only require yearly touch-ups to keep enjoying all that wholesome benefits.

If you’re suffering from snoring and sleep apnea in Atlanta and are interested in Fotona NightLase treatment contact Regen Medical Clinic Today!

Cookie Policy: To improve your browsing experience and the functionality of our site, we use cookies and other similar technologies. By continuing to browse our site, you are consenting to the storing on your device of all the technologies described here in our Cookie Policy. You can change your cookie settings in your preferred browser settings. Take some time to read our Privacy Policy - Terms of Use to understand how we maintain our site, and how we may collect and use visitor data.>Cookie SettingsAccept All
Manage consent

This website uses cookies to improve your experience while you navigate through the website. Out of these, the cookies that are categorized as necessary are stored on your browser as they are essential for the working of basic functionalities of the website. We also use third-party cookies that help us analyze and understand how you use this website. These cookies will be stored in your browser only with your consent. You also have the option to opt-out of these cookies. But opting out of some of these cookies may affect your browsing experience.
Necessary Always Enabled
Necessary cookies are absolutely essential for the website to function properly. These cookies ensure basic functionalities and security features of the website, anonymously.
Functional
Functional cookies help to perform certain functionalities like sharing the content of the website on social media platforms, collect feedbacks, and other third-party features.
Performance
Performance cookies are used to understand and analyze the key performance indexes of the website which helps in delivering a better user experience for the visitors.
Analytics
Analytical cookies are used to understand how visitors interact with the website. These cookies help provide information on metrics the number of visitors, bounce rate, traffic source, etc.
Advertisement
Advertisement cookies are used to provide visitors with relevant ads and marketing campaigns. These cookies track visitors across websites and collect information to provide customized ads.
Others
Other uncategorized cookies are those that are being analyzed and have not been classified into a category as yet.
SAVE & ACCEPT